Neptune God of the Seas

Neptune is the last Player to arrive, usually late for the game. Alluring and nebulous, he is neither here nor there and in all places at once. Seductive and powerful, Neptune plays the Game of Life in an almost flippant, careless way.

Neptune is a visionary and he aspires to those things in the future. He is the King of the Sea and the creator of mist. He is romantic and sensitive and intuitive by nature. King Neptune commands the attention of those around him by captivating his audience with great stories of faraway exotic lands.

Vague and mysterious, Neptune is deceptive. He leads you on and fills your mind with visions of glamour and grandeur. It is easy to be fooled by Neptune - he is so great - so sublime. Illusions and delusions are part of the price we pay when under the spell of Neptune.

Fond of liquor and perfumes, Neptune cares little for the realities of domestic life. Seaside, port side, or in some far away exotic land, Neptune enjoys long journeys - the further away from his home, the better. 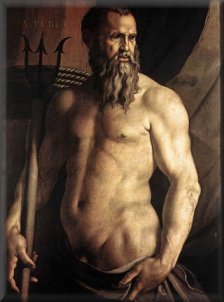